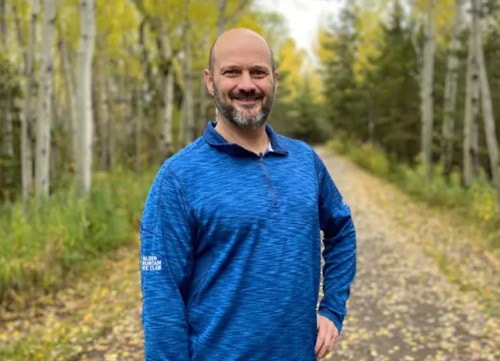 In the last few days of Steve Matusch’s life, he had a conversation with his friend Andre Dumais about the importance of keeping the Sudbury Rocks! race going.

Matusch was the founder of the annual Sudbury Rocks race and died earlier this year after getting a rare disease that left him with liver cancer.

“He asked me if I would continue to sponsor the event because the company I work for sponsors the event and I said of course I would,” Dumais recalled.

“I told him I’d go one step further and run the race for him this year.”

Matusch helped found the race in 2005, which attracts thousands of runners and walkers to Sudbury.

“The whole purpose for starting this race is he wanted a Boston qualifier closer to home so he could qualify for the Boston marathon,” Dumais explained.

“That’s what sort of motivated him to get this thing going. I said, you know what, that’s something that’s pretty impressive and it’s a community component.”

At the time, Dumais didn’t run. He works out regularly, but running was not part of his fitness routine. Two days after Matusch died, Dumais laced up his running shoes and headed out.

“I got to about 2k before I started seeing spots and things got a little bit difficult,” he said.

“Then from that point, it was walk, run, walk run, for a little bit. Then I just insisted, you know, every second day, go out and see if I can do better.”

Dumais has kept to that schedule of running every second day. He says the change has been beneficial.

“One of them is it gives me a half hour of just turning my brain off, where things get to reset before the end of the day,” he said.

“The other thing it’s brought me is a slightly elevated fitness level. It’s helped with the cross training of some of the other activities.”

When Dumais started running, he posted his progress on social media to keep him motivated.

“When I started posting my runs to keep myself accountable, I was getting a tremendous amount of support from people commenting and feedback,” he said.

“I felt like I couldn’t let my friends down once I started.”

His online presence has also helped him fundraise for the upcoming Sudbury Rocks race, surpassing his goal of $2,500.

Throughout his running journey, Dumais has been thinking about his friend Steve, and says he’d be pleased.

“He’d be giving me a load of crap for putting a Run for Steve tagline on my social media, but I think he would be proud of it,” he said with a laugh.

“It’s something that he was always very proud of, his ability, and we’ve talked about it in the past. I think he would be happy.”

Sudbury’s Steve Matusch inspired people to run when he was alive. Even after his death, his legacy is still encouraging others. The CBC’s Martha Dillman shared the story of one Sudbury man who took up running after his friend and mentor died. 5:06

Variant Mining Technologies is a leader in providing clients with muck circuit material handling solutions, solving some of the industry’s biggest challenges in moving material safely and efficiently, while remaining cost competitive. As an innovation driven company with roots in an internationally recognized mining center, our growth plan has always been focused on staying ahead of the curve..
Read More

If you’re too busy to chat now, please enter your cell # and message below and we will text you back as soon as possible.