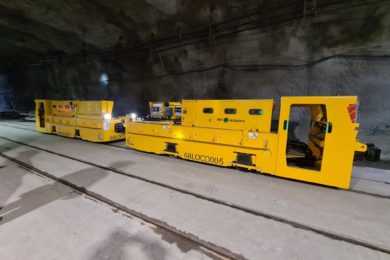 Clayton Equipment Ltd based in Burton-on-Trent, UK has sold and delivered five (with an option for a sixth) CB12.5 state of the art lithium-ion battery locos for Glencore’s Onaping Depth nickel-copper mine in Sudbury, which are notable as being the first Li-ion battery electric machines to be operational on site. These will operate on the main 1,200 m haulage level which was positioned there as that is at the top of the existing Craig Mine ore and waste pass system, so effectively utilising that system’s capacity.

Steve Gretton, Clayton Managing Director told IM: “Glencore is not new to mining rail – we sold then Xstrata some 25 t battery locos going back about six years for the Fraser mine. So they are well used to rail underground and to Clayton products. Those machines were good solid units with the best electronic controls available at the time, but these locos for Onaping Depth are on another level, equipped with full WiFi, peer to peer communications and the latest Li-ion batteries plus a customised safety logic system.”

Clayton has also enabled wireless connection to remote driving stations at the discharge point and the loading point which is linked to the feed rate of the loading point. “It is quite a sophisticated solution to their materials handling needs and has been designed in conjunction with the team at Glencore.”

Gretton said that when the mine gets its own network up and running (wireless mesh or LTE) the trains will use both that network to communicate with the overall mine control platform as well as the rail system’s own network controlling things at a train scale.

The trains will consist of two locos either end of an A train or B train – the A train being used for ore and waste (239 t maximum), and B trains for personnel and materials. The A train will have 14, 5.8 m3 bottom discharge rail cars from Nordic Minesteel Technologies in North Bay (one empty as an overspill) and the maximum haulage distance will be 1.6 km. The battery capacity will be enough for 10 hours of operation during each shift with each loco (two in each train) having two 52 kW motors and 184 kWh of battery power. 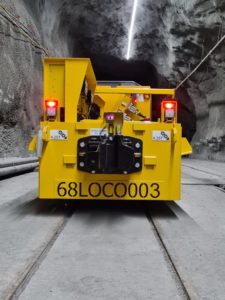 The trains need to be rotated on a regular basis between being A and B trains as the A trains will take much more weight which means more battery power demand – this will even out the usage pattern for the battery packs & will allow them to last up to 15 years. It will not be the first Li-ion battery mining rail system but is certainly the most powerful ever built. The batteries were supplied by a Canadian manufacturer for combining with the locos shipped from the UK.

The locos arrived in Canada in late 2020 after testing in the UK and started working in May 2021 following certification, approvals, battery fitting and testing at Clayton’s Canadian agency facility, Variant Mining Technologies (VMT) in Sudbury, only half an hour from the mine. The locos went down the shaft in three pieces for final assembly underground.

The haulage level will include 12 track lines. The rail system itself will have its own WiFi network and RFID tagging to allow the locos to read speed limits based on what line they are going to, what type of train it is and what’s coming next, including applying autonomous braking using hydraulic disc brakes plus dynamic service brakes for operator use.

While there will be loco operators, he or she cannot override the set overspeed limits; with 16 km/h set for personnel trains and 10 km/h for trains carrying any explosives. They cannot take the train where the safety logic does not allow such as a fully laden ore train into the maintenance personnel or material areas. A very high level of safety is incorporated meaning A trains are only permitted on certain lines and the same for B trains. The trains are effectively have the potential to be fully autonomous capable with the backbone in place but with operators there initially running them in semi-autonomous mode.

The mine wants the locos now for efficient materials and personnel movement but also some early ore movement during development works. They also want to be able to commission and check underground crushers, feeders and the loading stations.

Article by: By International Minging – im-mining.com

Variant Mining Technologies is a leader in providing clients with muck circuit material handling solutions, solving some of the industry’s biggest challenges in moving material safely and efficiently, while remaining cost competitive. As an innovation driven company with roots in an internationally recognized mining center, our growth plan has always been focused on staying ahead of the curve..
Read More

If you’re too busy to chat now, please enter your cell # and message below and we will text you back as soon as possible.